Based on the amplified quenching or superquenching effect, conjugated polyelectrolytes can be used to sense a variety of analytes, such as metal ion, inorganic ions, organic ions, and bio-molecules (DNA, proteins, etc.). For example, the fluorescence of PPE-CO2– can be efficiently quenched by Cu2+. This system was used to sense pyrophosphate, an important anion involved in many biological processes. Because of the stronger binding of Cu2+to PPi, the PPE-CO2– fluorescence is recovered as shown in the following Figure. We have developed a real-time assay for alkaline phosphatase (ALP) based on this system, and efforts to use such a system to sense other important biological analytes, such as ATP, are under the way.

A fluorescence turn-off assay for phospholipase C (PLC) is developed based on the reversible interaction between the natural substrate, phosphatidylcholine and a fluorescent, CPE. The fluorescence intensity of the CPE in water is increased substantially by the addition of the phospholipid due to the formation of a CPE-lipid complex. Incubation of the CPE-lipid complex with the enzyme PLC causes the fluorescence intensity to decrease (turn-off sensor); the response arises due to PLC-catalyzed hydrolysis of the phosphatidylcholine, which effectively disrupts the CPE-lipid complex. The PLC assay operates with phospholipid substrate concentrations in the mM range and the analytical detection limit for PLC is < 1 nM. It demonstrated a good selectivity by testing the response of PLC and other enzymes. The optimized assay provides convenient, rapid and real-time sensor for PLC activity. The real-time fluorescence intensity from the CPE can be converted to substrate concentration by using an ex-situ calibration curve, allowing PLC catalyzed reaction rates and kinetic parameters to be determined.

As another example, meta-inked PPE-type CPEs can self-assemble into a helical conformation in aqueous solution. This allows mPPESO3 to be used as a platform for sensing biological targets with high sensitivity. A biotin-linked Re complex can quench the fluorescence of the polymer. In the presence of avidin, it is expected that due to stronger interaction between biotin and avidin, the intercalation of Re complex into polymer would be disrupted, and the polymer fluorescence would recover.

Polymers are synthesized separately and the terminal of the polymer chains are functionalized with carboxyl functional groups. Then, polymer brushes are attached onto the surface through amide bonds via DCC/DMAP chemistry. These colloids with surface grafted polyelectrolytes retain the fluorescence ability of the polymer as shown in the confocal microscopy image. The presence of the polymers can also be observed in the SEM image.

Quenching experiments using a cyanine dye shows very efficient amplified quenching effect that is characteristic of conjugated polyelectrolyte. Possible applications of such particles include quantum dots and fluorescent sensors. At UNM, these particle are currently investigated for possible applications in light-activated bactericides. 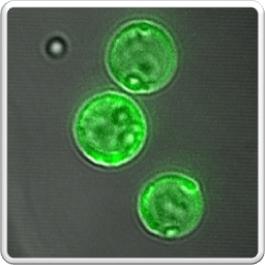 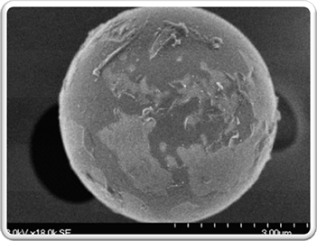 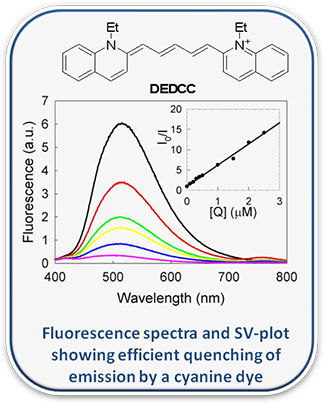 We are interested in the development of conjugated polyelectrolyte capsules from inorganic colloids towards use in sensing applications from these new materials. Synthesis of highly monodisperse manganese carbonate particles has been used to serve as template particles for layer-by-layer (LBL) fabrication of polyelectrolyte capsules. Using the LBL technique conjugated polyelectrolytes are deposited on the inorganic colloid to form bilayers of oppositely charged polyelectrolytes, followed by dissolution of the inorganic core leaving behind the PE capsule. This has been demonstrated using poly(diallyldimethylammonium chloride) (PDDA) and poly(phenylene ethynylene) (PPE) with a carboxlate side group (PPE-CO2–) to form PE capsules. Capsules have been synthesized in a well dispersed fashion ranging in size from 4-6 μm. Characterization under fluorescent and confocal microscopes displays the stability of the capsules structure, along with the fluorescent emission from the conjugated polyelectrolyte capsule. Future work with these materials will be in the development of sensing applications utilizing the fluorescent properties of the CPE.

The fluorescence of conjugated polyelectrolytes (CPEs) is quenched with very high efficiency by small molecule quenchers with opposite charges. This effect has been referred to as amplified quenching or superquenching. We study the profound correlation between the fluorescence quenching efficiency, CPE chain aggregation (induced by the addition of either Ca2+ or H2O to methanol solution), and quencher molecular size. We propose that the superlinear Stern-Volmer quenching behavior typically observed in CPE-quencher systems arises due to quencher-induced aggregation of the CPE chains.

For an example, two of the poly(phenyleneethynylene)-based CCPEs bearing cationic imidazolium groups synthesized in our lab showed excellent biocidal activity. These two polymers having same backbone differ only by the frequency of the imidazolium groups present on the chain, which in turn changes their solubility property in water. Addition of an anionic electron-acceptor like anthraquinone disulphate, even in a relatively low concentration to these CCPEs solution quenches their fluorescence via the amplified quenching effect. These CCPEs also display aggregation-induced fluorescence quenching property when exposed to pyrophosphates. Our investigation on their biocidal activity against Gram-negative Escherichia coli and Gram-positive Staphylococcus aureus bacteria in the dark and under blue-light-illumination revealed that these CCPEs are effective biocides, exhibiting greater than 3 log kill with 30-60 min of light exposure at concentrations of <10 mg mL-1.

Support for our research has come from the National Science Foundation, the UNC Energy Frontier Research Center, and the Department of Energy.

Our research has benefited from collaborations with a number of groups including Thomas Meyer (UNC-CH) and John Reynolds (GA Tech).